How Do Fish Sleep In A Tank? Interesting Facts! 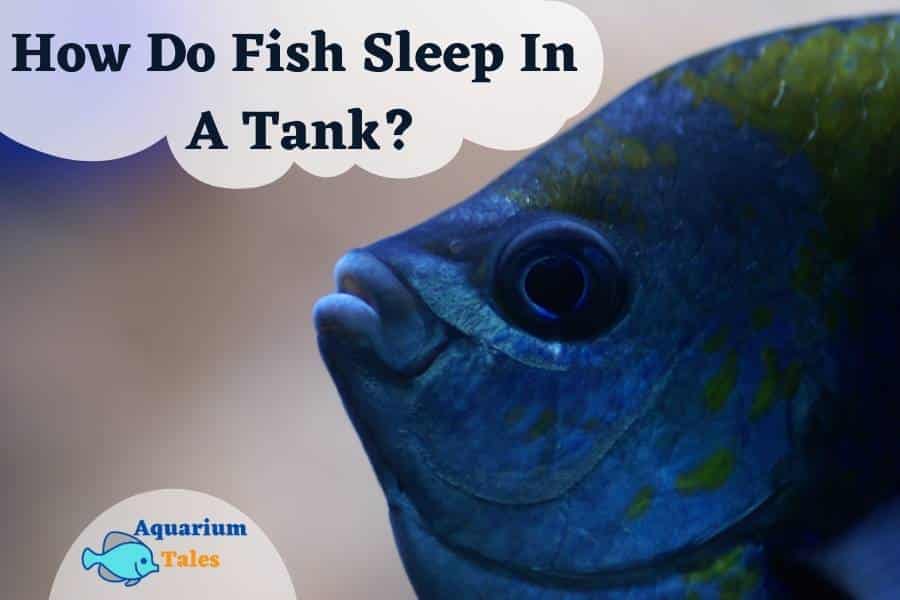 Have you ever seen a fish sleeping? I know it sounds quirky, but they can sleep just like us, and if one pays close attention to these creatures, they can realize it.

So, how do fish sleep in a tank? A vastly asked question by interested aquarists.

Here are some fascinating facts about fish sleep! When you think of all the creatures that roam underwater, it may be hard to believe they have anything in common with us land-bound humans.

Most animals require to sleep or rest – at regular periods to invigorate their bodies, process information from the day, and “charge” themselves.

You can usually tell when most animals are sleeping; they close their eyes (or part of it), lie down, eliminating all movement on a superficial level as if fallen into deep thought for hours without interruption.

Scientists have identified that a part of our mind called the neocortex shuts down throughout rapid eye movement cycles. At the same time, animals rest to allow other factors like instinctual behaviors associated with dreams/sensations to occur internally without interference.

How Do Fish Sleep?

Fish don’t have eyelids, so they can’t close their eyes, and the fish’s brain is tiny. This means that it lacks a neocortex (neocortical neurons). So do fish sleep as we humans do? Then researchers found out – most species of them go into what feels like a restful state while sleeping!

In reality, fish go into a relaxing state where they continue to be still and experience reduced breathing and metabolic rates, in addition to lower brain activity.

Fish can sleep in two different ways. One type of slumber they experience, called “alert rest,” where the brain stays awake but senses are always on high alert to prepare for danger. While another one is “actual sleep,” a more standard kind entails total neural inhibition with muscles becoming relaxed except those needed.

While most fish remain motionless when they’re sleeping, certain species of sharks must keep moving even while at rest to ventilate their gills.

On an even more exciting note, some marine Parrotfishes and Wrasses surround themselves with a slimy “sleeping bag” that may help protect them from predators or parasites by enveloping the body in protective mucus cocoons during rests hours.

This sleeping state is required for fish for their sound health and also disease resistance. So, fundamentally, fish do “sleep”; it’s simply a different kind than what we’re accustomed to in other pets.

How Do Fish Sleep In A Tank?

When fish sleep, they remain still, and their breathing slows down. Some even go into an animation-like state where you can pick them up in your hand!

The researchers were able to identify slow-wave sleep and paradoxical deep slumber in the fish, just like mammals, birds, and reptiles. While this discovery was made at Stanford University by researchers using state-of-the-art technology on Zebra Danios.

The only difference was that during deep sleep, they did not show Rapid Eye Movement (REM) like human beings and also other animals, as well as, of course, they do not shut their eyes since they do not have eyelids.

Where fish sleep in your tank varies from species to type. Some lay on the bottom or bury themselves in the sand – some hide in caves for protection. You’ll see some fish float or drift along motionlessly near the surface, and some nestle right into plants, driftwood, corals, or other items.

Sometimes they will appear to be “stuck” and not move an inch when in fact, these fish are just resting after having spent time diving underwater for food!

How Do You Know If The Fish Is Sleeping?

Fish do not intend to recognize resting spots by observing their eyes because no eyelids cover them when sleeping.

Fish are an interesting bunch, aren’t they? Commonly, all fish living in aquariums have a tendency to exist motionless on the bottom or near the water surface and rest during their sleeping hours.

One of my goldfish, who sleeps every day from 9:00 PM until morning, remains still on the substrate, and it is his sleeping behavior.

If it’s slow-moving and lazy, then there are probably sleeping and swimming around aimlessly on autopilot mode (you know what I mean). Try feeding fish when you see this happen – most likely, not only will they have sluggish reflexes but also won’t react at all towards any appetites thrown their way!

Slow-moving activities and decreased heart rate reveal that its metabolic rate has lowered, which the fish is, as a result, conserving power to rest the body.

Fish have been known to sleep for up to several hours a day, so you should never disturb them when they’re asleep as it may cause stress.

Signs that your fish are sleeping consist of:

When Do Fish Sleep?

Researchers think that most fish have regular sleep schedules, just like human beings and other animals.

Most aquarium fish are diurnal, implying they remain active throughout the day and sleep during the night.

Some types of fish are nocturnal and spend their days asleep, huddled up in caves or crevices. Certain species of catfish, as well as Plecostomus, have this classification too!

Scientists have discovered that some fish, like Tilapia, don’t start sleeping until they are 5-6 months old. However, some parent fish cannot sleep during long nights of caretaking for young. In addition, wild fish won’t generally be found napping during their migration because it’s an important time-traveler activity!

How Long Do Fish Sleep?

Fish are creatures of habit, and they tend to follow similar trends in sleeping patterns. For example, some will take short naps both during the day and at night. In contrast, others sleep only in spurts or not at all, depending on their environment. Some prefer what’s called an “Adaptive Barker” pattern where it varies with time while maintaining a certain regularity overall.

It’s been said that the fish living inside an aquarium tend to synchronize their biorhythm with times of switching on and off lights. So if you want your pet fish accustomed to sleeping at night, it may be best for them by turning out all aquarium lights before going to bedtime.

Do Fish Suffer From Sleep Disorders?

A study on Zebra Danios discovered that when deprived of sleep for a few days using mild electrical current, they slept more when returned to their typical environment.

However, suppose fish are kept under constant artificial lights (like what’s inside an aquarium). In that case, they will keep their regular sleep cycle no matter how long you make them wait before returning to their day job as usual!

How Do I Make Sure My Fish Get Enough Sleep?

The easiest way to ensure your fish are adequately sleeping is by giving them a consistent day and night routine. So, turn off the aquarium light at night – for convenience, you can use a timer. In addition, provide plenty of cover in their home as well.

Fish need to sleep on a regular basis so they can stay healthy and live long, happy lives! This is why you should watch out for any signs that your fish might be exhausted.

If you have anything else to know about fish behavior, please leave a comment below!

Tags:How Do Fish Sleep In A Tank