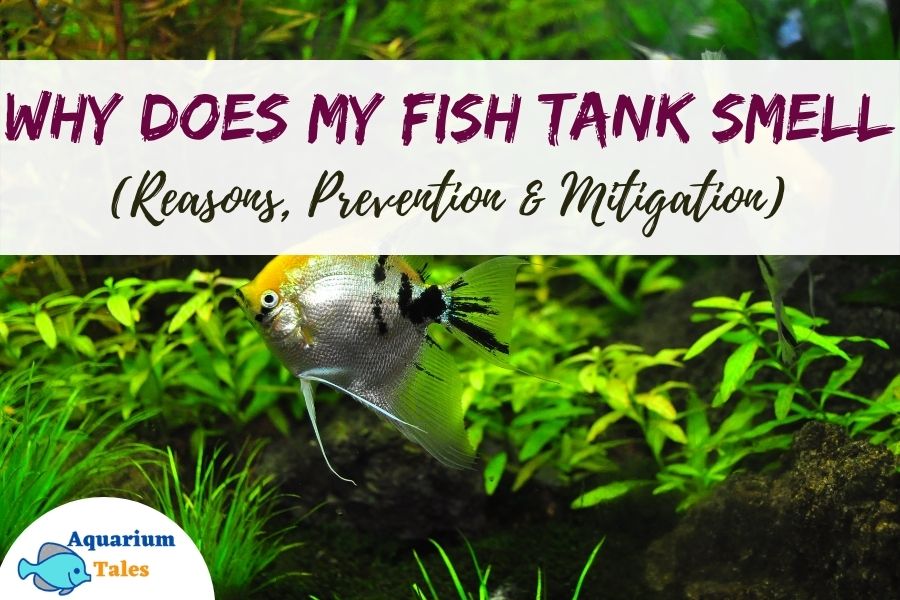 Generally, aquariums don’t stink, and unless you stick your nose too close to the tank filter, you won’t smell anything nasty. But sometimes, it smells terrible and can be irritating.

Probably, you are searching for the answer to the question, why does my fish tank smell? What am I doing wrong? This blog post will give you a detailed overview of the reasons and what you can do to prevent your aquarium from becoming smelly.

Why does my fish tank smell (Reasons)?

Why does my fish tank smell bad? One of the most common questions I notice in fishkeeping forums. However, before giving the answer straight away, I would like to let you know the reasons first that cause unwanted smell in your tank.

Dead fish is by far the most common cause of a smelly tank, especially if the odor is strong enough that you can smell in the air. Unfortunately, it may be several days following the fish passing before you realize something isn’t right with your aquatic environment!

This can happen especially in larger aquariums with lots of fish where dead fish is difficult to notice. If fish die in the aquarium and remain unnoticed, their body starts to decompose. After that, body fat, proteins, and off-gas will come out from decomposed dead fish.

Overfeeding is, unfortunately, a widespread problem in the fishkeeping hobby, especially for beginners. If you give your fish too much food, uneaten foods sink and accumulate at the bottom of their tank. That will settle down there and will quickly begin to decompose and release foul-smelling gasses. The smell becomes stronger and stronger as the leftover foods pile up.

You may not have realized it, but the unpleasant odor of decomposing food in your tank could be causing more than just an ugly situation. Ammonia build-up and potential poisoning are two significant risks from it!

#3-: Wastes from an overstocked tank

Overstocking means that there is more fish than what they were designed for. This is because fish produces excrement, and as the number of fish increases, so does the fish waste.

The fish waste smells like Ammonia, but the stench is mild primarily and only becomes noticeable when there’s too much of it. So, if you overstock your fish tank, water quality will fail, and because of it, chances are your aquarium will stink.

Rotting plants can be a real nose breaker, although it’s less common. They’re not only unattractive but also emit an awful odor! Fortunately for you, these dead plants are easy to spot.

Plant leaves may start turning yellow/white at the edges then fall off altogether. They often turn slimy brown or black in color at the aquarium bottom and foul up the water quality.

If you have a fish tank, then it’s essential to invest in an efficient filtration system. As the water passes through your filter and into media, any floating particles or debris are removed in the process.

However, they can become clogged over time if not taken care of properly, which will hamper the water circulation. As a result, fish will suffer because the bacteria that help break down the waster won’t work appropriately; subsequently, water quality will fail.

If water quality is poor, you can smell Ammonia which is nothing but similar to pee. Moreover, fish may produce extra mucus (most common in goldfish tanks), which smells bad. A visual mucus indicator can be slimy bubbles on the water surface.

To get the most out of your water filter, be sure to clean it at least once every three months or so. If you notice that something doesn’t seem right with its performance, probably it’s time to clean that up.

If your fish tank smells like rotten eggs, which is basically the smell of hydrogen sulfide, then your substrate might be at fault. For example, sand or very fine gravel compact over time and can produce zones where there is no oxygen.

In oxygen-depleted areas, anaerobic bacteria thrive. As trash gets trapped in these pockets, bacteria growth stimulates, and they convert wastes into gases. Gas is mainly hydrogen sulfide, which has the signature smell of rotten eggs.

This problem escalates when the air pump or filter in your tank is clogged or faulty. Nitrates and phosphates levels build up because of that and in turn, feed the bacteria. To remedy the situation, you’ll need to vacuum your substrate weekly and bi-weekly. Also, make sure your filters and air pump are clean and working properly.

Why Does My Fish Tank Smell After A Water Change?

Sometimes you may notice your tank smells after a water change. That could be for several reasons. First, you usually do a 25 % water change in routine water change, meaning you still leave 75% of water containing fish wastes.

After changing 25% of water, take a couple more minutes and remove the water up to 50% if you still get the smell. If required, a 50% water change is recommended; otherwise, you should change only 25% because a large water change may shock your fish.

If you get a kind of swampy odor, that could be cyanobacteria (aka blue-green algae) that might be growing on your substrate or decorations – potentially giving a more pungent earthy smell!

How to Treat Stinky Aquarium Water

Are you having trouble determining which smell is coming from your aquarium? Sometimes it can be because every scent in the aquarium might be unique and challenging to identify the cause. But regardless of the reason, you’ll take the systematic approach mentioned below that will lead you towards the solution.

The first thing you should do when your fish tank starts to smell, count your fish. Are any of them missing? If yes, search for the dead fish. Sometimes a dead fish may be consumed by other tank mates. In that case, you won’t find the missing fish.

But a reduced number of fish is alarming, and you should look for any lethargic or sickly looking ones and put them in quarantine to be monitored for diseases!

If fish all are ok, organic material build-up or your substrate could be the problem. Next, check for dead leaves or uneaten food. Take all of the dead leaves out of your aquarium. Also, prune any leaves showing signs of weakness. Finally, vacuum up all the substrate and give the whole tank a good cleaning.

After that, give your aquarium filter a good clean-up. If there’s a lot of debris in the tank, it indicates that your filter has been clogged and not filtering well for some time.

After you’ve dealt with the source of that terrible smell, it’s time to maintain the odorless environment. First off- do regular water changes over the next couple of days and try replacing 10 to 20% each day for about a week. This will add fresh oxygen and help to establish an odorless aquarium.

One essential thing to remember, don’t overstock your tank because no matter how much cleaning and water changes you do, the aquarium will always get toxic faster than a person can clean it if you overstock.

Carbon filters have become one of the most popular ways for people who want their aquarium smelling fresh. Basically, you can expedite clearing up the smell by incorporating carbon filter media in your aquarium filter. Carbon media do wonders in terms of removing odors, colors, and toxins.

It works by the adsorption method and traps pollutants in the media. Similarly, they pull the odors and stop spreading in your aquarium space. However, the only downside is that you have to regularly replace the carbon media (usually once a month).

Be careful while buying carbon media because low-quality media can degrade faster and won’t function for long.

Do you know what’s other important? A carbon material with a large surface area. It lets you catch odors and other pollutants more efficiently, which is essential for your aquarium health!

Now you know, there are several reasons why your tank might smell. One is that it’s been too long since you’ve cleaned your tank or changed the water. The other reasons could be due to an overpopulation of fish which can cause odors from waste and rotting food.

With proper care, a fish tank won’t smell bad, though! Here are some tips on how to clean and maintain your aquarium so that it doesn’t stink up the whole house:

1) Do a complete water change at least once every two months (more if needed).

2) Clean the gravel regularly and vacuum out any debris or leftover food particles.

2 thoughts on “Why Does My Fish Tank Smell (Reasons, Prevention & Mitigation)”