Are you observing a white film on top of the aquarium water and pondering why this awkward thing suddenly appeared? Though it is not a very common problem, you are not the first person facing it.

The white film layer’s appearance can be slightly different from case to case, but more or less, it looks like an oily layer. Sometimes it is a white layer or greyish white, or it can be just like floating oil layers reflecting rainbow colors under lights.

I’ll talk about this mysterious white film on top of aquarium water, and hopefully, all your confusion will be overcome.

Contents show
1 What is this white film?
2 Why is this white film bad?
2.1 It hinders air-water contact:
2.2 It looks unpleasant:
3 Reasons for forming the white film on the aquarium water surface
3.1 1) Fish food
3.2 2) Overstocking
3.3 3) Low turbulence in the water
3.4 4) Inadequate chemical filtration
3.5 5) The water source
3.6 6) An oily working hand
3.7 7) Decomposed dead fish
3.8 8) External greasy matters
4 How to get rid of white film formation on top of aquarium water
4.1 1) Have a powerful air pump with an airstone
4.2 2) Have a surface skimmer
4.3 3) Have an effective chemical filtration
4.4 4) Manual removal with paper towels
5 A Quick Comparison Among The Ways Of Removing White Film
6 Final words

What is this white film?

The white film on top of aquarium water is nothing but an oily protein layer. The primary source of it is bio fat, and so, this white film is often referred to as a ‘biofilm.’

It occurs for several reasons that I will discuss in later sections.

When it appears as clear as oil, it is sometimes difficult to identify. Oily protein matters can also form a glossy coating on top of aquarium items like decors and inside glass walls.

Why is this white film bad?

Though white film on top of the aquarium water is not something terrible, not a good thing, either. You have at least two reasons to combat it.

The aquarium water must come in contact with the ambient air. Fish need oxygen to survive, and they collect it from dissolved oxygen in the water. Oxygen dissolves in the water from the air contact.

Simultaneously, CO2 produced from fish respiration raises the CO2 level of water unless dissolved CO2 evaporates into the air. The white layer also creates restrictions for CO2 to get released into the air. Thus trapped CO2 in the aquarium water can kill your fish.

The second reason is aesthetic, and to me, it is also vital. A healthy-looking aquarium can give you a pleasing feel. Fishkeeping is your hobby and the source of refreshment. A neat and clean aquarium is desirable, so you should not let surface scums ruin your aquarium’s beauty.

Reasons for forming the white film on the aquarium water surface

People sometimes get confused about the sudden appearing this greasy layer. I have read a case on a forum, and I found it interesting.

An aquarist was away from home, and his wife was deployed to take care of his aquarium fish for six months. During this long period, she just fed the fish every few days and did nothing but water top-up when required. Everything was going smoothly.

But after the aquarist returned home and started feeding the pets regularly with other maintenance activities, he observed forming a white layer! It seemed strange to him.

I thought about the case and realized that probably the extra food he started to provide for his fish’s wellbeing was the protein layer’s primary causing factor. There might have some other factors. Let’s discuss one by one:

As I said, fish food could be the major contributing factor to forming a fatty layer. Especially protein-rich food like frozen bloodworms is a significant source of oily matters.

If you overfeed your fish, they can’t consume them all. Food leftovers first dissolve and then decompose.

When fatty food dissolves in the water, fat comes out to form a white layer on top of the water.

A protein-rich food is essential for fish’s growth, so you cannot stop feeding it. But you can ensure no food leftovers by providing less.

In normal circumstances, fish waste is manageable by routine cleaning. But if you overstock, fish will produce a lot of oily wastes. And if that happens, a white layer or oil slick forms.

Therefore, I recommend stocking in the right proportion to avoid this to happen.

3) Low turbulence in the water

Where the aquarium owner maintains a low water circulation flow or has no airstone to produce bubbles, white film formation is a more possible scenario there.

Continuous bubbling can somewhat be capable of throwing oily matters out of the water. An air pump adds extra oxygen to the water, and it is also beneficial in fighting against white films.

If your system doesn’t have adequate chemical filtration, keeping all protein and oil sources uncontrolled might be a reason for a layer formation on top of the water.

If you use water that contains any dissolved mineral, it can be oxidized over time and form a white layer. Some iron compounds that are present in the tap water may have such characteristics.

Initially, these compounds remain dissolved in the water. But they react with oxygen and get converted to some other products that form a thin layer on the water surface.

It is not good to engage in aquarium work with bare hands. The aquarium water carries germs that can be harmful to humans also. And at the same time, oily matters can contaminate the aquarium water.

So it is quite possible that sinking your oily hand frequently in the aquarium water eventually forms an oil slick, especially in small aquariums with a low volume of water.

If fish die in the aquarium, remain unnoticed, and their body decomposes, body fat will come out from decomposed dead fish.

So, you can imagine what the next thing is going to happen. Fatty matters start floating on top of the aquarium water and form an oily while film.

This reason is feasible in larger aquariums with lots of fish where dead fish is difficult to notice.

External airborne oily things can enter your aquarium if it is an open-top. The location of the aquarium is also a vital consideration for this point.

If the fish tank is located near any roadside open window or near the kitchen, it is more likely that fine mists of organic matter contaminate the aquarium water.

Perfumes, aerosols, or cooking oil vapors from the kitchen entering the aquarium may form an oily film on top of the water.

None would appreciate a white film on top of the aquarium water, as it looks unpleasant and at the same time could be unhealthy for fish. Here I am suggesting four solutions to get rid of it.

1) Have a powerful air pump with an airstone

Having an air pump is probably the easiest solution to this problem. Keep strong water flow in the aquarium and have an airstone to form bubbles.

You can use a filter with a strong output or a spray bar to keep a high water current in the aquarium.

Alternatively, you can enhance the water flow by adjusting the flow nozzle’s direction, for instance, pointing it to a surface.

2) Have a surface skimmer

A surface skimmer is the most effective solution to oil slick or protein layer formation. There are two types of surface skimmers available in the market.

The self-driven ones utilize electric power and suck all sorts of surface scums into them. 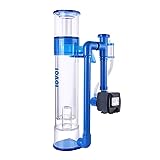 Protein Skimmers for Saltwater Aquariums, Hang On...
Buy on Amazon

The working principle of the second type is pretty simple. You have to attach the skimmer with the inflow of a filter.

When the filter draws water into it, the skimmer will guide all floating substances from the surface to the filter’s inlet. Thus the filter will absorb all the fatty matter to deliver clear water.

3) Have an effective chemical filtration

Carbon media can absorb organic fatty matters. If you can have an effective multistage filter with chemical filtration, the probability of this sort of problem is less. 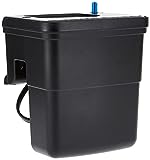 Even if you use a non-electrical type surface skimmer to attach with the filter, your filter has to have to capability to filter out these oily scums.

In complex aquascaping aquariums, it may not be possible to maintain a powerful water flow. Or, for any reason, you cannot use a surface skimmer.

So, you have a solution to remove white layer matter from the top of the water manually by using paper towels.

First, you have to let the surface layer settle by turning off the filter and pump. Then gently put the paper towel on top of the layer to soak it and then pick it right back up.

Thus you can completely remove the white layer from the top of the water. But this solution is temporary, and the layer will form again.

So, you have to repeatedly do this task in a routine or think about system improvement, as I discussed before.

A Quick Comparison Among The Ways Of Removing White Film

Frankly speaking, I haven’t faced such a problem throughout my entire fishkeeping journey. If you keep all the basics right, you won’t have to suffer. Follow my tips, and I believe that will help you.

Lastly, if you have any better experience fighting against the white film on top of aquarium water, I would love to hear about it. Please don’t hesitate to put your comment in the below box.