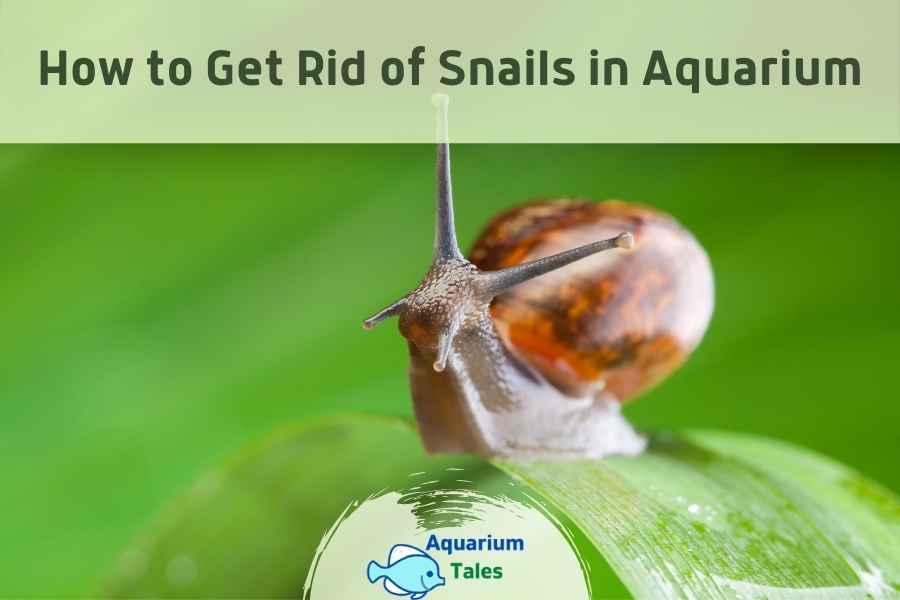 Snails are one of the most common pests found in aquariums. They can multiply quickly and eat up all your fish’s food, which leads to starvation for your fish.

They crawl around the tank, get in your plants and leave slime trails everywhere.

Aside from being a pest, they also carry diseases that can be passed on to your other pets- including humans!

Where Do Snails Come From?

Snails are sneaky little critters. They can be tiny, but they’re always hunting for a way into your tank!

Sometimes snails arrive with the fish you buy at the store and end up in there when it’s time to introduce them to their new home – like a present from Mother Nature herself.

All it takes is one discrete snail or few eggs, and before long, you’ll have an entire community of friendly mollusks living inside your aquarium!

A single snail or few eggs can quickly turn your peaceful habitat into an uninviting mess and make it difficult for you to keep up on maintenance duties.

How Do Snails Multiply In Aquariums?

Ever wonder how a snail reproduces in an aquarium?

Snails reproduce by releasing eggs and sperm into the water. The eggs then travel to the surface, where they are fertilized by the sperm.

Once fertilized, they sink back down to the bottom of your tank. This process repeats until there is enough food for baby snails!

In a way, your snail problem is like the old story of how rabbits got on Noah’s Ark. One pair (snail and mate) multiplied into many couples in no time at all!

However, unlike many animals, most snails don’t need a mate to reproduce. They can fertilize their own eggs alone. Two weeks later, they become single parents!

Furthermore, it is not uncommon for some species of snails to spend their daytime under the substrate, coming out only at night to search for food.

Types Of Pest Snail In Aquarium

The pond snail is not a fish, and it’s not an amphibian. It can’t swim like a tadpole, either! But don’t let the name fool you – these little guys are most common to encounter in an aquarium.

What do they eat? Pond snails will feed on algae that grow on rocks or anything else submerged in water because their mouth doesn’t work well enough to catch food by itself.

While pond snails are not a problem for most aquarists, they can be a big deal for those with smaller tanks. Their breeding rate is too high.

They make eggs in globs of gelatin. This is why they are so invasive because the egg can cling to anything and survive for a long time until it hatches.

Ramshorn snails are often considered pests in freshwater aquariums because they reproduce quickly and can outcompete other invertebrates for food.

However, these little guys provide plenty of services to the ecosystem by eating excess algae that would otherwise cloud up the tank.

If you have a freshwater aquarium, it is essential to keep an eye on your Ramshorn population so you don’t find yourself with too many undesirables!

The Trumpet Snail is one of the most common snails to be found in aquariums. They are often considered harmless because they do not feed on fish or plants, but this is not true.

They suck oxygen from the water, eat fish eggs, and even kill small fry.

The trumpet snail is not just a hideous creature to have in your tank; it is dangerous to any life that exists within it.

How To Get Rid Of Snails In Aquarium

Snails are a pervasive problem for aquarists. They come in many shapes and sizes, but all of them pose the same threat to fish-keepers. So if you have an aquarium and want to know how to control snails, keep reading.

There are many snail traps available in the market. However, you don’t need those because here’s a great idea – take some lettuce leaves and place them at the bottom of your tank. The snails will come out for food.

Next morning they will remain busy in feasting, and you will scoop them out of the tank.

You can remove them with a net (or just suck them up with a vacuum). You cannot completely eliminate but control snails in this way.

The children are always fascinated when I tell them how we keep our snail population under control at home by disposing of any extra ones who come along during dinner or breakfast.

Tips: You can use cucumber also as a trap for snails. Check this interesting video on how cucumber works in removing snails.

Aquarists are always in search of a way to keep their aquariums healthy and thriving. The latest trend is adding snail-eating fish into the water to help control snails, harmful to other aquatic life.

This method helps keep your tank clean and free from pesky pests like urchins, clams, and sea cucumbers.

So what are these snail-eating fish I’m talking about?

Loaches such as Clown Loach & Yo-Yo- Loach are a staple in many aquariums due to their ability to eat algae and detritus, but one of their most exciting behaviors is that they will dive under the substrate.

Loaches have been observed hunting for snails below the tank’s flooring, which can be both fascinating and concerning at times.

So if you want a fish that will eat all the snails on your tank (even ones hiding under the substrate) without being too big or expensive…these guys may just be right up your alley!

The labyrinth fish, such as the Betta and Gourami, commonly eat fry (baby fish) and small insects. These species of fish also enjoy snails. Some aquarists even feed their Bettas live snails.

These small catfish only grow up to 3 inches long, and they have a mouth that looks like it has teeth but doesn’t really have any teeth at all.

They have whiskers on their cheeks and swim around your tank with ease by using their pectoral fins or side fins as oars. Besides snails, they will eat algae too!

The Assassin snail is a sustainable and natural solution for controlling pest snails in the aquarium. As their name implies, they are assassins that hunt down other snails and eat them!

These tiny creatures are not only effective at killing off harmful pests such as apple mollusks, but they also help keep your tank clean by eating algae!

The fish in my aquarium are going to love this copper treatment! Copper is a chemical element that can be added to an aquatic tank and drastically reduce snail populations.

However, great care must take when using it because too much may kill off some or even all unprotected species such as sharks within the tank’s ecosystem balance (depending on what type you use).

The snails are pesky when it comes to fish tanks, but there’s a way for you to reduce their number by simply feeding your fishes less. Snails feed on uneaten food.

In order to deal with the snail infestation, it is recommended that you reduce how much food you give your fish.

This will decrease food leftovers available for snails and thus eliminate one potential cause of their overpopulation in tanks.

I should never let snails go into my tank in the first place. The best way to avoid snail problems is by not letting these pests ever enter your aquarium.

When picking up new pet fish at a store, just remember one thing—nothing gets added directly onto your tank without being treated beforehand.

When I buy fish, I always make sure that nothing that comes inside its bag (including water) is poured into the tank, getting rid of any eggs and larvae before they can spread through the aquarium.

Quarantining new fish before adding them to your tank is one of the best ways to keep snails out. It will also help protect against other diseases and infections that new arrivals can pick up into the tank, which is an added bonus!

What is quarantine? Quarantine is when you put any new living creature in isolation away from other animals or humans so they can be observed for signs of disease or illness.

Why should I care about this? Fish can carry parasites like snails, and some parasites will infect other fish if introduced into the aquarium without being quarantined first!

New plants are a great way to give your aquarium some life, but they may come with unwelcome hitchhikers, namely snails.

And if you’re buying live plants, be careful; treat them with something like salt or vinegar for about an hour before putting them into your tanks, so they don’t bring anything over from their environment! I have some treating solutions here:

At first, I was hesitant to try Potassium Permanganate on my new plants because it sounded really harmful.

However, after doing some research and talking to a few people who have tried it both with positive results AND without harming the plants at all, I decided to give it a shot.

To prepare the solution, mix one gallon of water and half a tablespoon of potassium permanganate to make a soaking bath for fifteen minutes before planting new plants into the tank.

We need a soaking solution. One and a half cups of bleach in one gallon of water should suffice for five minutes, followed by another 5 minutes with plain water and dechlorinating agents to rinse it all off nicely.

Be aware that fragile plants may get damaged by the solutions containing bleach, but this is actually your best option if you want to kill snails or eggs as it’s the most effective way!

Soak your new plants in a gallon of water mixed with two tablespoons of alum for three days. This will remove snail eggs from the plant leaves and stems before planting them in their permanent home, like an aquarium tank.

Do you hate snails? Do they scare you? Would you rather have a fish tank without any of them at all? We get it. They can be pretty gross to look at and touch.

Did you know that Snails are harmful when they are pests but can be fantastic aquarium pets also?

Snails are actually not that bad for your aquarium or fish tank. They’re great at eating algae and keeping things clean by eating leftover fish food or other debris in your tank. But you need to control their number as some of them are crazy breeders.

However, snails may not be the most popular pet for aquarists, but they are surprisingly interesting.

They have been around since before the dinosaurs and, while their role in society has changed over time, it’s clear that we humans still can’t get enough of these tiny slimy invertebrates.

Having snails in your fish tank isn’t always a bad thing, as these little critters can do wonders for the tank’s ecosystem.

You can use snails to check the algae from growing in your aquarium. They eat off any food that may have been left behind by fish and are a self-sufficient, harmless creature – as long as you remember not to let them outburst in population!